Every now and then I come across a phrase, idea, or image in a novel that puzzles me.  Here are three examples from novels I’ve read recently: A Reckless Witch (Debora Geary), Imperfect Bliss (Susan Fales-Hill), and Sweet Tea and Secrets (Nancy Naigle).

(1) Who knew that “meaningless words” could be comforting?

I’m not sure if this is a typo or not, but it made me laugh:
“It was the first time in six years Sierra had felt someone hold her tight and whisper meaningless words in her hair.  Her tears came in a torrent.” (emphasis added) [Chapter 2]

The sentence reminds me of the phrase, “whispering sweet nothings,” but “sweet nothings” sounds a bit better than “meaningless words.”  As I read that sentence, I imagined someone holding Sierra and whispering a string of nonsense, “Fire truck, cloud, tree stump, toilet bowl, dog food…,” into her hair.

That said, I enjoyed A Reckless Witch, which is my favorite of the four books in Debora Geary’s A Modern Witch series (it’s the third book).  It’s best suited for young adult readers, but it certainly could appeal to a more mature crowd that would be interested in a story about a young girl (who happens to be a witch) aging out of foster care and dealing with issues of abandonment and uncertainty.  I particularly like how Geary ties up loose ends with each novel in the series.  She has created likeable characters and a charming witching world.  Here are my comments on A Modern Witch (book 1) and A Hidden Witch (book 2).

(2) Glossing Over the Horrors of the Past

In Susan Fales-Hill’s Imperfect Bliss, the main character laments the “distressing trends of the new century,” such as cell phones, and “pretend[s] to have returned to the days of President Healy, the first African American to earn a PhD, become a Jesuit priest, and head a university.” [Chapter 3]

Why on earth would a half-Jamaican woman want to return to the days of Georgetown’s President Healy, who passed away in 1910, before women received the right to vote (1919), before the desegregation of public schools (starting in 1954), before the Civil Rights Act of 1964, before the unconstitutionality of anti-miscegenation laws (1967), and before the Education Amendments of 1972 (Title IX) (the list goes on and on)?  It’s a simple case of romanticizing the past, when, let’s be honest, the past sucked, particularly for ethnic minorities and women, and the main character of Imperfect Bliss is both.

(3) Home Cure for the Hiccups 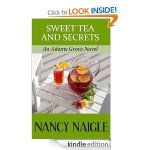 In Nancy Naigle’s Sweet Tea and Secrets, which I liked, “[Jill] drew in a staggered breath.  Hiccup… Garrett went to the kitchen and got her a glass of water.  She sipped it backwards.  It was the only thing that ever worked.”  [Chapter 6]

I had to Google this home remedy because I had no idea what it meant to sip a glass of water “backwards.”  Cups don’t have a front and back, right?  Per Google, I assume Naigle means, “drinking from the opposite side of a glass” (the upper rim).  Apparently, it’s a common home remedy, but I’d never heard of it before.  I guess you learn something new every day.