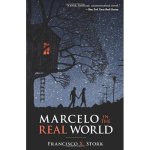 Francisco X. Stork’s novel, Marcelo in the Real World, collected dust on my bookshelf for an entire year before I read it.  I probably bought the book because the design on the cover appealed to me, but it is a young adult, coming-of age story, and thus part of a genre I didn’t often read back then.  So, it sat, until I read Molly Spring’s review last week, giving me the nudge I needed to crack the book open, finally.

[Warning: This review contains a handful of spoilers, but it does not reveal how the story wraps up]

The verdict: It’s a wonderful book.  In fact, it’s so good that I believe it should be required reading for anyone entering the legal profession.  That doesn’t mean it has no faults.  Nothing’s perfect.  In this case, the book’s numerous virtues far outweigh its minor flaws.  We legal minded folk call that a basic cost-benefit analysis.

Let’s start with the benefits.

It is fascinating to read a story about a seventeen-year-old young man with an Asperger’s-like condition that is told from the child’s perspective (there’s an interesting author’s note at the end of the book explaining Stork’s connection to individuals like Marcelo).

Marcelo’s condition limits his ability to communicate with others (to a certain extent), but from the outside, without interacting with him, a person would not know he is “different.”  His parents downplay his differences and believe he can be fully included in the “real world,” a world that is much more welcoming now, as a result of the disabilities rights movement, than it used to be.  Marcelo’s experience is quite different from Stella’s experience, the character from Lee Fullbright’s The Angry Woman Suite (also a good book) who had a cleft lip and palate that impacted her ability to communicate verbally.  Unlike Marcelo, Stella looked different and lived at a time when, sadly, it was more common for individuals with such differences to be hidden from the public.

Another virtue of Stork’s Marcelo in the Real World is that it contains important lessons for aspiring lawyers, even if, in my opinion, the book falters on some of the aspects of the legal case affecting Marcelo’s experience at the mail room in his father’s firm.  The law firm specializes in patent law.  Marcelo’s father helps the firm’s clients obtain patents by representing them in front of the United States Patent and Trademark Office, and his partner, Stephen Holmes, represents the clients in litigation when they file infringement suits against other companies.  The firm has associates and a sizeable support staff.

Although this firm is obviously a boutique that specializes in patent work, for some reason, this firm also does products liability and negligence defense for their clients.  The firm’s major client, Vidromek, manufactures windshields, which, according to several lawsuits filed against the company by injured plaintiffs, shatter into shards more like daggers than the harmless pieces they should have become when involved in a collision.  This company is the firm’s biggest client, whose corporate defense case is entrusted, at least in part, to Mr. Holmes’ elitist son, Wendell, who is a rising senior at Harvard.

Wendell is described as “messy” in appearance, but I picture this squash-playing, yacht-sailing Harvard boy as looking like one of the Winklevoss twins of Facebook notoriety, a pair former Harvard President Larry Summers called “assholes,” having astutely observed that “… if an undergraduate is wearing a tie and jacket on Thursday afternoon at three o’clock, there are two possibilities. One is that they’re looking for a job and have an interview; the other is that they are an asshole.”

It is hard to believe that a firm like Sandoval & Holmes would have Wendell so involved in such a high profile case because, in addition to being an asshole who isn’t really interested in helping out, he’s an undergraduate.  Corporate defense firms are almost always paid primarily on an hourly rate and so they profit by assigning as many lawyers as they can to work as many hours as possible.  There’s little room to add a college student to do work (even mindless doc review) that could be assigned to a lawyer or a paralegal at a much higher billing rate.

I was dismayed by the portrayal of plaintiffs’ attorneys in this novel.  I found Mr. Gustafson, who represents some of the people injured by the defective windshields, to be a thin caricature of plaintiffs-side trial lawyers:

First, there’s Gustafson’s swarmy, unethical “win-win” proposition to Mr. Sandoval. Sure, there are unethical attorneys, on both sides, out there, but this proposition doesn’t quite fit into the way plaintiffs’ attorneys usually get paid, particularly in catastrophic injury cases.  Most are paid on a contingent fee arrangement, agreed upon in advance in writing, which means that plaintiffs’ attorneys get paid only when they win (or settle), and then their payment is a pre-agreed percentage of the amount collected.  There isn’t much room for what Gustafson proposes in these types of agreements.

Second, Mr. Gustafson’s response to Mr. Sandoval’s insult that he’s an “ambulance chaser” was irritating.  Sandoval says, “[Vidromek] think[s] you rounded up five people hurt by their windshield and pretty much told them they would be rich if they sued.”  To which Gustafson replies, “We didn’t have to try too hard to ‘round people up,’ as you put it.  My five clients came out of the woodwork pretty easily,” doing little to counter the stereotype of plaintiffs’ attorneys chasing down ambulances and handing out their cards to anyone, including those with frivolous cases.  I’m surprised Gustafson did not note how injured his clients were.  They would have been lucky to survive such a catastrophic injury.

Furthermore, a second plaintiff’s attorney in this book tries to settle the case early because he admits to defense counsel that, “You’d kill me with depositions and other bullshit discovery that you know a solo practitioner like me can’t handle.”  Well, that’s why solo practitioners in real life refer those kinds of expensive cases to plaintiffs’ firms with bigger war chests.  They get a referral fee, which is an incentive to lawyers with smaller practices to connect clients to the right kinds of legal services.

While I do not know the specific legal claims alleged against Vidromek, they are not frivolous ones, the type an ambulance chaser would allege, but instead, are meritorious ones where there are numerous factual issues that must go to a jury.  The novel suggests that the central legal issue in these types of cases is whether Vidromek knew in advance that its product was dangerous and manufactured it anyway.  This simplified description of products’ liability didn’t seem quite right to me, so I asked Max at Litigation and Trial for his thoughts:

In a product liability case, it would certainly help the plaintiff to find a “smoking gun” that proves the company knew its product was unreasonably dangerous — and we try to find documents like that — but it’s not essential for the plaintiff to prove that. In most states, including Massachusetts, the company is liable if either (1) the company should have known of the product’s dangers and it was unreasonable for the company not to fix the product or (2) if the product was sold “in a defective condition unreasonably dangerous to the consumer.” The former would prove a claim for negligence, while the latter would prove a claim for strict liability (though Massachusetts somewhat strangely calls that latter claim a breach of warranty, rather than strict liability).

The over-simplified version of torts/contract law in Marcelo in the Real World is probably good enough for an audience of young adults (I haven’t forgotten that this book is aimed at children ages 12 and up), but it may be frustrating for people in the “and up” category who want a better understanding of the legal system.

There is also a questionable explanation of attorney-client privilege, with Arturo Sandoval claiming that “there is a reasonable argument that a document, once it is reviewed by counsel, comes under the attorney-client privilege.”  Maybe he’s giving his son a simple answer, but that’s an entirely unreasonable argument under Massachusetts law.  See, e.g., Commissioner of Revenue v. Comcast Corporation & Another, 453 Mass. 293 (2009)(To be privileged, the disclosure has to be made to the attorney for the purposes of securing legal advice).

Still, the book is worth reading for those interested in entering the legal profession.  It is a reminder about the human side of the law, particularly of the people who have been injured and who need legal representation.  These are real people with real problems, and no matter how hard the Roberts Supreme Court tries to claim otherwise, corporations are not people.  They should not have more rights than real people do.  That isn’t to say that corporations don’t need honest representation.  Indeed, there are some ambulance chasers out there and some frivolous claims, which the legal system easily weeds out with preliminary objections/12(b)(6) motions, regrettably throwing out some meritorious cases too when judges can’t tell the difference.

But no one should over-emphasize the importance of corporate work, the way many law schools encourage students to think.  Something happens to students between 1L and 3L year, as they march or stumble onto the On Campus Recruiting conveyor belt leading from graduation to the corporate law firm door.  For those who have always wanted those jobs, fine, but for the rest, those jobs often bear little resemblance to the type of work they had come to law school to do.  Marcelo in the Real World will help these students remember what it was that inspired them to take the LSAT.  Not everyone can be a public interest attorney, but we sure could use more empathetic corporate defense lawyers who haven’t forgotten that at the heart of many cases is an injured person looking for compensation and an apology.