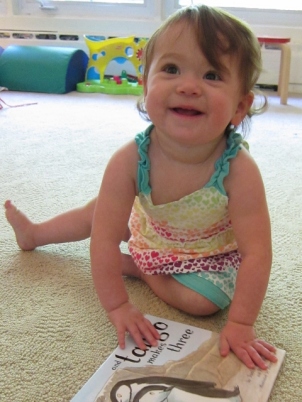 I am often on the receiving end of unsolicited parenting advice, or even worse, demands that the rules others apply to their children must also apply to mine.

Recently, one parent requested that my child’s school serve juice to none of the children because her child isn’t allowed to have it (for reasons unrelated to life-threatening allergies, for which I would make an exception).

Another parent suggested that all the kindergarteners receive more homework simply because she didn’t feel that the amount proposed by the teacher would be sufficiently challenging for her child. Really? I’m not even sure five-year-olds should have homework at all, much less more of it.

Thankfully, these are just minor annoyances, but they demonstrate a certain attitude that is unfortunately common: What’s best for my family is what’s best for all families.

It’s partly because of this attitude–more pernicious examples of it–that we have so many challenged or banned books to celebrate this week (for those who don’t know, it’s Banned Books Week from September 22nd through September 28th).

In 2011, there were 326 reported instances of books being challenged or removed from library shelves in the United States (I’m sure there are many that go unreported).  According to the American Library Association, library patrons challenged these books for a variety of reasons, often to “protect” children from what some consider offensive material, including profanity, sexual themes, or certain political or religious views.

For people with the audacity to challenge a book, it isn’t enough to tell their own children to refrain from checking out that book. They feel a need to make sure that my children can’t check out that book, too. They attempt to impose their views on me, my children, and everyone else without delineating why the book presents a clear harm to anyone.

Thankfully, our highest court in the United States has declared that public school boards (to which the First Amendment of the US Constitution applies), which often act in response to parent complaints, may not remove books from libraries “simply because they dislike the ideas contained in those books and seek by their removal to prescribe what shall be orthodox in politics, nationalism, religion, or other matters of opinion.” Bd. of Educ. v. Pico, 457 U.S. 853, 872 (1982) (internal citation omitted).

The problem, though, is that this case is weak. As I discussed in a previous post, Banning Books that Promote Tolerance? (talking about Todd Parr’s The Family Book and Peter Parnell and Justin Richardson’s And Tango Makes Three):

As a plurality opinion (meaning a majority of the court couldn’t agree on anything) from three-decades ago with a completely different composition of the Supreme Court, it’s hard to know whether the Supreme Court would follow it today.

In fact, in 2009, the Federal Court of Appeals for the 11th Circuit concluded that Pico “establishes no standard.” ACLU, Inc. v. Miami-Dade County Sch. Bd., 557 F.3d 1177, 1200 (11th Cir. 2009). The 11th Circuit then decided that a school board’s decision to remove a book from library shelves did not violate the First Amendment because, whether or not Pico applies, the school board’s removal decision was due to  “inaccuracies” in the book, not because “they dislike[d] the ideas contained in [the] book.”  Id.

On the surface, it makes sense to permit the removal of factually inaccurate books. Stan and Jan Berenstain’s The Day of the Dinosaur–a book I loved when I was six–wasn’t even accurate at the time it was published (as I discuss in The “Brontosaurus” Between Us).

However, in many cases, how we decide what is “inaccurate” is often far from objective. For example, some may challenge a book about evolution based on their perception that it’s “inaccurate” because it contradicts a biblical view of human history, while to quote paleontologist Dr. Scott Sampson in The Dinosaur Odyssey, the theory of evolution has “with[stood] decades of testing and [has] become accepted as fact.” So, what may seem like a challenge based on “inaccuracies” may be nothing more than an underhanded effort to favor a certain political and religious viewpoint.

My preferred way to deal with books that contain ideas I disagree with or facts I believe are false is to have a discussion with my children about why I feel the way I do. I would not impose my beliefs on everyone else by insisting that the book disappear. As Justice Brandeis wrote in a concurring opinion in Whitney v. California, 274 U.S. 357 (1927), “If there be time to expose through discussion the falsehood and fallacies, to avert the evil by the processes of education, the remedy to be applied is more speech, not enforced silence. Only an emergency can justify repression.”

Of course, there are people who may find my position hypocritical. They might think I’m imposing my views on their families by exposing their children to ideas contrary to the way they’ve been raised at home. This point reminds me of a one-star review one reader (“Ike”) left on Amazon for Todd Parr’s It’s Okay to be Different (an excellent children’s book I discuss in What’s Not Okay):

I use this book to teach my children about how the left attempts to brainwash children like the Hitler youth. Then, 15 years later, they are voting Democrat in every election… Can’t believe the religion of diversity is allowed, but the religion of traditional values is not. Why is that? Why does the left feel the overwhelming need to reach our precious children when they are most vulnerable? …

I suppose I commend “Ike” for using the book as a teaching tool, as opposed to demanding its removal, but the reasons he gives for using it are the same ones others have used for removing books from library shelves (see here for examples of books that have been challenged due to “ungodly” content or same-sex families).

All I can say to folks like that is this: exposure to many different ideas doesn’t brainwash people. It’s the exposure to only one idea or belief system that does. If the mere exposure to new ideas is enough for those old beliefs to crumble, then its proponents should stop to consider why their beliefs aren’t more persuasive. In my opinion, an idea that can’t withstand a fair debate isn’t an idea worth passing onto the next generation.

*Image: My youngest daughter (summer 2012) with And Tango Makes Three, a children’s book that has been challenged numerous times due to the fact that it features same-sex penguins raising a baby.