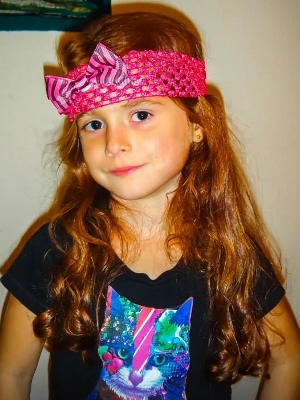 “Pink? Of course redheads can wear pink!” My daughter says indignantly, looking down at the copper hair brushing against her bright pink Hello Kitty shirt. There isn’t a day that goes by when she doesn’t wear at least a pink hair accessory (see above). She asks, “Why does Anne say we can’t wear pink? It’s my favorite color!”

S. has just come across the part in L.M. Montgomery’s century-old novel, Anne of Green Gables, when eleven-year-old Anne says to Marilla Cuthbert: “Redheaded people can’t wear pink, not even in imagination.”

“Of course we can!” S. says, rolling her eyes just as she did when Anne proclaimed that nobody with red hair could be “perfectly happy.”

This is my daughter’s first exposure to negative attitudes about red hair. In my daughter’s experience, her hair color has garnered nothing but praise (too much of it, if you ask me; Americans are obsessed with red hair).

I had been wondering how S. and her redheaded twin sister would respond to Anne when they finally read the Anne of Green Gables series.* S. is only six-years-old, a few years younger than I was when I read these novels, but she has been asking to read the first book ever since she has known of its existence. Her sister isn’t quite as interested in this novel at this time; she’s happier reading less complicated chapter books on her own.

So, S. and I are reading Anne of Green Gables together. I am narrating most of the story, explaining the advanced or antiquated vocabulary words as we go along. Occasionally, S. jumps in and reads parts of it herself.

Now that I’m reading this novel with my daughter, I am realizing that aspects of it might be inappropriate for a child who is too young to contextualize our racially charged history. Published in 1908 and set in Canada, it’s a product of its time and place. For example, Marilla refers to “stupid, half-grown little French boys,” and, when explaining her decision to adopt a child, says, “Give me a native born at least.” Thankfully, S. hasn’t stumbled on those words herself, so I’ve been able to skip them seamlessly.**

So far, my daughter hasn’t let her strong disagreement with Anne over hair color get in the way of their friendship.* She has bonded with Anne, the “lonely, heart-hungry, friendless child” whom the Cuthberts plan to return to the orphanage because she was not the boy they had requested. S. exclaims, “But a girl is just as good as a boy!” She hopes that kind-hearted Matthew will be able to convince his practical, less emotional sister to keep Anne at Green Gables. She asks me to re-read multiple times Matthew’s reason for wanting to keep Anne: “We might be some good to her.”

With tears streaming down her face, S. insists we keep reading until she learns whether Anne will return to the orphanage. Two hours later, now knowing whether Anne will stay or go, S. wipes the tears from her eyes, grins, and asks me, “Can we read some more?”

It’s already 10 PM, so no. But we’ll continue with the story tomorrow. According to our Kindle, we have at least 92 hours of reading pleasure left in this series.*** I suspect S. will enjoy every minute of it, just like I did.

**For my perspective on sanitizing children’s books, see More Thoughts on the Censorship Spectrum: Cleansing Racist Themes From Children’s Books.

***We don’t have every book in these series as an e-book. I have all of them in paper form, though.