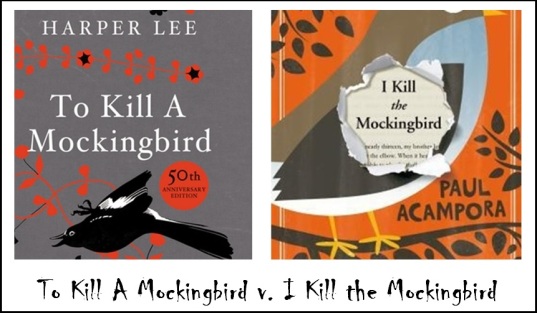 [UPDATE: It looks like Lee and the Museum have settled again. The stipulation of dismissal appeared on the docket two days after I published this post. The terms of the settlement are undisclosed. I’m glad to see this case end (assuming they go through with the settlement this time), but the issue remains about whether authors can or should control the culture related to their novels.]

What is the best way to encourage teenagers to read a book?

It’s to tell them they can’t read it, of course. That’s exactly what eighth graders Lucy, Michael, and Elena decide to do in Paul Acampora’s I Kill the Mockingbird to increase the popularity of Lucy’s favorite book, Harper Lee’s To Kill a Mockingbird (1960). Their stealth campaign to “turn To Kill a Mockingbird into forbidden fruit” is a fun story for young readers that touches on serious topics, such as censorship and mortality, without losing its light feel. It’s ideal for middle grade readers, particularly those who have already read Harper Lee’s classic.

Just like Lucy, I love To Kill a Mockingbird. Not only do I have a heavily marked-up paper copy, but I’ve also pre-ordered the e-book version,which will finally be available on July 8th (What took it so long?!). I look forward to reading it again, even though I re-read it last summer as part of a read-along.

As I said about To Kill a Mockingbird back then in We Were All Children Once (Even Lawyers):

Like many lawyers, I count this novel among the influences that eventually led me to law school and to my public interest legal career. It was a pleasure to revisit Lee’s words, which encouraged me to reminisce about my childhood and to evaluate whether my own sense of justice has remained true to who I am. I look forward to discussing this novel with my daughters someday. They don’t want to be lawyers, but we’ll see if they change their minds after meeting Atticus.

It’s an influential novel that has retained its popularity for the last fifty years. As a 2014 Harris Poll showed, To Kill a Mockingbird is one of America’s favorite books. It’s even more popular than it was in 2008. Part of this enduring popularity likely comes from cultural references like Acampora’s novel and the exhibits and merchandise at the Monroe County Heritage Museum in Lee’s hometown.

Then there are Harper Lee’s lawsuits, which seem to be a particularly effective way of bringing attention to a book–at least in the short term. In 2013, Lee sued her former agent for allegedly breaching his fiduciary duty and assigning away the copyright to her only novel. Later that same year, after filing a trademark application, Lee sued her hometown museum because they were selling clothing and merchandise bearing the four words in the title of her book.

In her lawsuit (here’s the complaint), Harper Lee alleged that the Museum’s use of “To Kill A Mockingbird” on clothing and memorabilia violated federal trademark laws, Alabama trademark laws, and the common law in a variety of ways, constituting “unfair competition,” “dilution,” and “cybersquatting.”

The Museum asked the Court to dismiss the case for three main reasons:(1) that the Museum had been selling that merchandise for 18 years, and so the statute of limitations had run (that’s the deadline for filing lawsuits); (2) that Lee had been aware of the Museum’s activities for years and thus had implicitly consented to the sales; and (3) that Lee did not have a federal trademark for merchandise (because the trademark office had denied her application), and her copyright interest in the book was not enough to give her the right to control how the title was used in other types of products.

In February 2014, after the Court refused to dismiss the case, Lee and the Museum apparently settled it. In late May of this year, though, Lee asked the Court to reopen the case. A trial is set for November.

The Implications of Lee’s Lawsuit On Other References To Her Novel:

Taking Lee’s lawyers’ arguments at face value, there is a potential threat to books like Acampora’s I Kill the Mockingbird, which has a title that is similar to the title of Lee’s novel. In a hypothetical case (that I hope would never happen!), Lee would only need to file a short complaint alleging that Acampora’s title and book are “confusingly similar to the plaintiff’s mark, such that there was a likelihood of confusion for consumers as to the proper origin of the goods [or services] created by the defendant’s use of the name.” I’m loosely paraphasing a quote that appears in Harper Lee’s brief (on page 7).

If the Court agrees with the argument Lee’s lawyers have made against the Museum that To Kill A Mockingbird is “eligible for protection under § 43(a) of the Lanham Act,”* Lee can go after anyone selling a book or merchandise with a name arguably similar to To Kill A Mockingbird, much the same way as NIKE and Coca-Cola can go after anyone using a similar product name. Even Susan G. Komen — a breast cancer charity — has mercilessly protected its trademark on “for the cure” (a pretty generic phrase, in my opinion) by going after charities with similar names.

It may seem like a stretch that Harper Lee would go after authors who choose titles “too similar” to hers, but who would’ve thought she’d go after the hometown museum dedicated to promoting the culture related to her novel after so many years of her tacit approval?

If the Court allows Harper Lee to control the culture related to her novel, it would not only be a threat to writers who want to pay homage to her important book, but it would also be a threat to her legacy. As I said in my analysis of the Faulkner Estate’s lawsuit over a short paraphrase of a William Faulkner quote in Woody Allen’s Midnight in Paris, “[A] litigious nature could chill future references to the author, thus ending the free advertising and possibly hastening the speed with which the public will lose interest in [the] work.”

In the long run, Harper Lee’s lawsuit against her hometown museum could be a nail in the coffin of her book. Let’s hope that doesn’t turn out to be the case.

Check out these reviews of Paul Acampora’s I Kill the Mockingbird:

*Lee’s lawyers cite Sugar Busters LLC v. Brennan, 177 F.3d 258 (5th Cir. 1999) (“The rights in book titles are afforded appropriate protection under the law of unfair competition. If the title of such a single work has acquired secondary meaning, the holder of the rights to that title may prevent the use of the same or confusingly similar titles by other authors.”).