…And all through my house, every creature is stirring (except for a mouse, thanks to our cats).

We’re enjoying our bookish gifts today. I’ll be starting on Eula Biss’ On Immunity: An Inoculation, which was a gift from my father to me, and my daughters are thumbing through their set of Margaret Hillert early readers and Olivia books.

Meanwhile, Mr. A.M.B. is sipping from his new Jane Austen “It’s Elemental” mug, which I got for him after seeing it on Words for Worms (thanks, Katie!).

I got it in gold, of course — why would it come in any other color?!

It made the perfect tongue-in-cheek gift for my husband, who thinks Mr. Darcy is as charming as I do.

As I wrote in Why Jane Austen Appeals to Girls Who Don’t “Just Want a Boyfriend”: “To say that [Pride & Prejudice] is merely for ‘boy crazy’ girls not only ignores the complexities of the novel, but also overlooks the many men who count themselves among Jane Austen’s fans.”

My husband is one of those men. He explained his appreciation for Pride & Prejudice in More Reasons Why Jane Austen Isn’t Just For Girls Who Want a Boyfriend, giving three reasons why readers who aren’t otherwise inclined to read Austen’s most famous work should give it a chance.

He has also reviewed Sense & Sensibility and Persuasion on this blog.

In the latter post, as I explained in Jane Austen Teaches Science, I cut my husband’s paragraph recounting Austen’s discussion of the limits of proof—and later regretted it.

Considering Mr. A.M.B.’s interest in both science and Jane Austen, I thought any gift that combined the two would be perfect for him. This “Au” mug fit the bill! 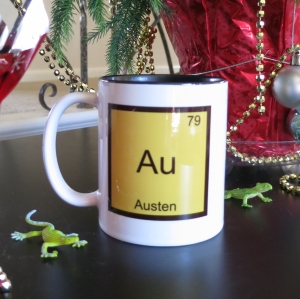 What bookish gifts did you receive (or give) this year?

*My daughters each decorated their own mini-Christmas trees (see first picture).