Below, Mr. AMB discusses Becky Chambers’ The Long Way to a Small, Angry Planet, “a welcome addition to the sci-fi canon,” thereby preventing my blog from suffering the full effect of my current reading slump (which persists despite how good this novel sounds!). 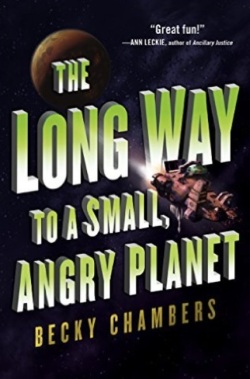 I was looking for a sci-fi book to read and saw that an io9 had a review titled, “The Long Way To A Small Angry Planet Is This Year’s Most Delightful Space Opera.” The recommendation in the title was good enough for me to download the book.

Set in the distant future, the novel follows the diverse crew (comprised of several humans and a variety of extraterrestrial species) of a ship that builds wormholes. Of course, if there isn’t already a wormhole somewhere, then it takes a while to get there in the first place (that’s “the long way”), and the new wormhole they’re building is next to a planet controlled by a rather belligerent species that has been tied up in warfare for as long as anyone can remember (that’s the “small, angry planet”).

Going off the title alone, I was expecting a swashbuckling tale with aliens and warp travel and all that fun stuff, and it delivered. What I did not expect, however, was a poignant allegory about the meaning of love. Not just romantic attachment, although that is in the book as well, but the love between family members, between friends, between those with shared principles or interests, and the strain put on those bonds by distance, culture, and fate.

Writing a space opera is always tricky, given the need to build whole civilizations and cultures and their histories without letting the action drag. The characters do indeed travel, ahem, a long way to a small, angry planet, but the book is less about that voyage than about discrete issues among the ensemble cast. The plot and pacing bear far more resemblance to a television series than to most science fiction books. With this structure, the world-building fits in neatly with the character drama occurring at that point in the story.

Notably, the book had a similar publication trajectory to The Martian.* After getting consistently rejected by traditional publishers, Becky Chambers set up a Kickstarter campaign (which drew $2,810 from 53 backers) and self-published the book. The book was then short-listed by the Kitschie awards, becoming the first self-published book with that distinction. Lo and behold, traditional publishing came running her way, and now the book is published by an imprint of HarperCollins.

All in all, The Long Way To A Small Angry Planet is a welcome addition to the sci-fi canon, and another reminder that traditional publishing isn’t particularly good at identifying up-and-coming authors with ideas for good new books.

*For my review of The Martian, see “The Martian” Brushes His Teeth and Shaves Every Morning (And So Should You).