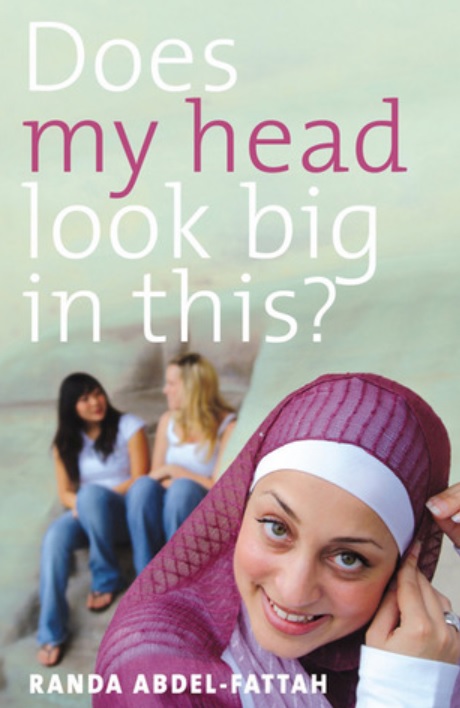 I don’t often come across a character in a book who shares my first name: Amal, which is Arabic in origin and generally means “hope.” Thanks to Amal Clooney,* more people in my part of the world are aware of it now, but when I was a kid, I didn’t come across any other “Amals” in reality or in fiction. The only exception is “Amahl” from the opera Amahl and the Night Visitors, and not only is that character’s name spelled differently from mine, but we’re also different genders. His existence encouraged many people to assume I’m male when they see my name on paper, a mistake that used to bother me when I was a kid.

Back then, I would have appreciated a book like Does My Head Look Big in This? by Randa Abdel-Fattah. This light, young adult novel features an Australian-Muslim-Palestinian teenager named Amal Mohamed Nasrullah Abdel-Hakim. Like me, she knows what it’s like to look different from everyone else at school, to practice a different religion, and to have a name that people frequently misspell or misstate. As she recounts hearing:

It was nice to read a book with a character who knows what this feels like. Amal Abdel-Hakim is smart, funny, and brave enough to assert her identity even when she knows it won’t be easy. In the novel, she decides to wear a hijab full-time, including at her snooty private school. Ms. Walsh, the principal, is opposed to Amal’s choice, saying,

Amal… hmmm… I don’t want to- I mean, I want to tread delicately on this… sensitive issue… hmm… Did you speak to anybody about wearing… about abandoning our school uniform?

Ms. Walsh assumes that Amal’s parents are forcing her to wear the headscarf–which is not true–and then tells Amal that she’s violating the school’s “history of tradition” by deviating from the strict uniform policy. It’s an Australian private school, which the novel suggests might be able to get away with prohibiting students from wearing clothing associated with their religion. You’ll have to read the novel to find out what happens.

In my country, the United States, private schools are often able to impose strict dress codes that prohibit religious clothing or symbols because students at private schools don’t have constitutional rights, including the First Amendment’s right to freely exercise religion. Public schools are another matter. As the U.S. Supreme Court said in Tinker v. Des Moines Independent Community School District, 393 U.S. 503 (1969), public school students do not “shed their constitutional rights to freedom of speech or expression at the schoolhouse gate.”** However, courts have upheld many restrictions on student expression, including restrictions that impinge on religious freedom, especially if the restriction is viewpoint- and content-neutral. See, e.g. Jacobs v. Clark County School District, 529 F.3d 419 (2008) (upholding a dress code that prohibited a printed message that reflected a student’s religious beliefs).

These days, whatever the constitution may or may not require, many schools avoid the issue by choosing to have dress codes that include religious exemptions. Here’s one example (PDF): “Head apparel (hats and hoods) are not permitted to be worn inside the school building, with the exception of those worn for medical or religious purposes,” thus permitting hijabs and similar religious clothing.

I wonder, though, as my country becomes increasingly Islamophobic, will these exemptions disappear? If so, will the courts condone it? We shall see.

*Thanks, but no thanks. Virtually everyone I meet for the first time points out that (1) I share my name with George Clooney’s wife, and (2) we’re both lawyers. I’m tired of having this conversation over and over again. [Update: And now that Amal and George are expecting twins, they’ll add that to the list too!]

**Public school teachers don’t “shed their constitutional rights [] at the schoolhouse gate” either. However, at least in my state, they do not have the right to wear religious clothing at school. In Pennsylvania, a state law prohibits public school teachers from “wearing… any dress, mark, emblem or insignia indicating the fact that such teacher is a member or adherent of any religious order, sect, or denomination.” 24 Pa. Cons. St. Ann. § 11-1112; see U.S. v. Bd. of Educ. for Sch. Dist. of Philadelphia, 911 F.2d 882 (3d Cir. 1990) (upholding the statute under an employment discrimination law because “barring religious attire is important to the maintenance of an atmosphere of religious neutrality in the classroom”).

***For another opinion on Does My Head Look Big in This?, see: Huntress of Diverse Books (“Abdel-Fattah took a topic that is discussed in such detail so often (nowadays and at that time) and was able to make me feel like I wasn’t being lectured.”)