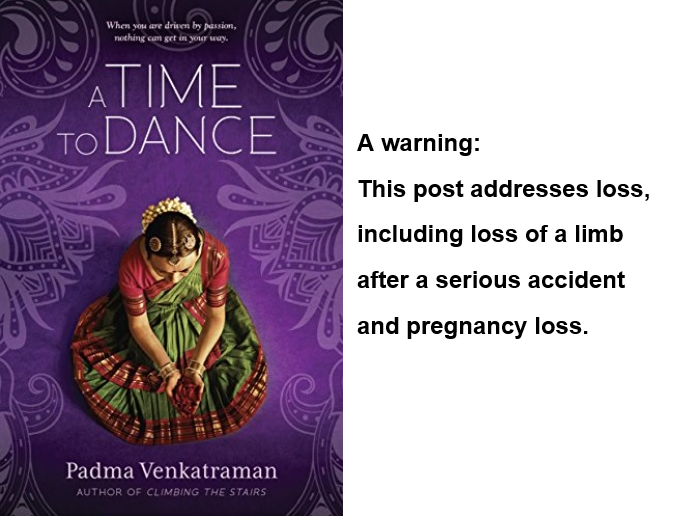 Teenager Veda Venkat, the star of Padma Venkatraman’s A Time to Dance, believes she excels at only one thing: Bharatanatyam dance. The rhythmic beats of this classical Indian dance speak a magical language to her, changing the way she sees herself. As she explains:

my graceful movements make up for

I can dance beauty into my body.

Dancing defines Veda to such a degree that when an accident takes away her leg below her knee, it threatens to take away her identity too. A Time to Dance is a lyrical novel, written in verse, that describes the poignant process of healing after a profound loss.

I do not know what it is like to lose a limb, an aspect of the novel that is not #ownvoices, but Veda’s feelings felt realistic to me and even somewhat familiar based on losses I’ve experienced in my life. Veda experiences a range of feelings, from grief to jealousy, as she reestablishes herself as a dancer despite the physical changes she has endured.

She says to her best friend, for example, “I hate seeing you walk.”

This line reminded me of how much I hated the sight of pregnant women after my twin pregnancy ended at 26 weeks, leaving my daughters struggling for their lives in the Neonatal Intensive Care Unit (NICU) for 78 days. It made me feel like a monster to hate looking at pregnant women, but I couldn’t help it. Those feelings only intensified when my next pregnancy resulted in a miscarriage, making me believe my body was irrevocably broken. My final pregnancy ended well over a month early, and my daughter spent a few days in the NICU. It was a better result than we’d ever had before, but still far from what I had hoped.

I hadn’t realized the degree to which I had absorbed my culture’s emphasis on female reproductive capacity–the terribly harmful and inaccurate belief that a woman’s role is to have children–until I just couldn’t achieve it the “right” way. I wondered what was wrong with me.

Those feelings of inadequacy have dissipated, thanks to time and the fact that my three children are now healthy. Looking at my twins now, you’d never know how fragile they once were. As a result, I am in a position to appreciate the silver linings of my family’s tumultuous beginning, and I even look back on our time in the NICU fondly (see Rosy Retrospection & #ReadingEmily). I’ve come a long way since those harrowing days beside my children’s incubators, watching their heart rates fall.

In A Time to Dance, Veda ends up in a similar place, feeling stronger as a result of her loss. To find out how she gets there, please read the book. I highly recommend it.

A Time to Dance is ideal for readers of middle grade and young adult fiction. One of my nine-year-old twins read it four times in a row because she loved it so much.

*Recommended by the Huntress of Diverse Books. Thanks, Sinead.