There’s nothing like a story about space and time travel to distract my poor kids from the discomfort of car sickness on a journey to the beach for spring break. We listened to the audiobook of Madeleine L’Engle’s A Wrinkle in Time, narrated by Hope Davis.

The book begins with a “dark and stormy night.”

For our spring break, the forecast called for a string of dark and stormy days, which is far from ideal for a beach vacation, but thankfully, the weather surpassed our expectations. The sunny skies didn’t stop my youngest child from asking to stay in the car a few more minutes to hear a few more lines of L’Engle’s classic novel, which we finished on the return trip.

This is the first time my almost-seven-year-old has heard the complete book. I read A Wrinkle in Time to her sisters a few years ago when they were seven. Back then, after hearing the term Meg used to describe the person who stole Mrs. Buncombe’s sheets on that dark and stormy night, their pressing question to me was: “Mommy, what’s a tramp?”

“Tramp” isn’t a term I hear much anymore. Parts of this early 1960s novel are dated, but space and time travel never get old. Now, this classic has found a new fan in my youngest child.

As soon as when we returned from our vacation, my daughter went with her father to see the film adaptation of A Wrinkle in Time, directed by Ava DuVernay. She loved it, despite noting what she thought were significant differences between the book and the film. She yearned for gentle Aunt Beast, and pointed out Calvin O’Keefe’s hair, which in the movie isn’t red. This discrepancy is quite a big deal in my household of redheads.

My youngest noted several other differences between the movie and the book, but never said anything about the characters’ races. The movie features a racially diverse cast, and the Murry family is interracial. Meg Murry, played by Storm Reid, is the daughter of a black mother and a white father. The book doesn’t address the Murry family’s race directly, but there are many references to physical traits associated with white people (but not always):

And, of course, some of the covers for this book make the racial background of the main characters more clear: 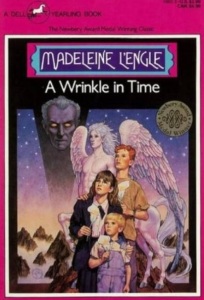 I wish I could say that the all-white cast of the book is one of the outdated aspects of A Wrinkle in Time, but while children’s literature today is less likely to feature all-white communities than it was in 1962, deeply entrenched residential segregation remains a reality in America. Where I live is different, though. I’m raising my kids in the diverse community where my parents raised me.

But, of course, Meg isn’t necessarily white in the minds of the children meeting her for the first time on paper. I remember being able to deviate from the hints about race in the text to imagine characters that better reflected my mixed-race, Sri Lankan-American family and my diverse friends. I’m sure it was easier to overcome the occasional reference to “blond hair” and “creamy skin” because the cover of my childhood copy featured the otherworldly Mrs. Whatsit instead of white people.

*My twins loved A Wrinkle in Time enough to reference it a few times in Anusha of Prospect Corner, our multicultural adaptation of Anne of Green Gables. A Wrinkle in Time and its sequel, A Wind in the Door, are among Anusha’s favorite books.